I’ve been drawing portraits of activists I find inspiring to celebrate their efforts and shine a light on the work that they do. Initially, I had no goal in mind as to what I would do with the images. I was acting from a place of inspiration, working on what I considered to be a passion project.

I created a portrait of Indigenous activist, journalist and author, Tanya Talaga, whose work I greatly admire. I continued on with portraits of historical Métis activist Gabriel Dumont, Greta Thunberg, Vandana Shiva, Autumn Peltier, Ruth Bader Ginsburg, Christina Mittermeier, Wangari Mathai, Freda Huson and David Suzuki. I kept on drawing portraits in my spare time until life interrupted and I was forced to focus on other matters.

Eventually I made my way back to the portraits, arranged the images into a short video, titled it Inspiring Activists, and posted it on my @ChicaDeeDesigns Instagram account to little fanfare. But I loved the project and wondered how I could keep creating portraits while simultaneously using them to uplift and inspire. I had the idea to create a new instagram account called @InspiringIndigenous that would focus on portraiture and also feature uplifting artists, activists and Elders from the Indigenous community.

Eventually I used the images I generated for @InspiringIndigenous to apply for the MNBC Nakaatchihtow Grant. The grant ultimately allowed me to create twenty-six portraits for an art exhibit at the Massy Arts Gallery and a zero carbon emission book titled Métis Now: Elders, Artists, and Activists that was printed by award winning, Hemlock Press. I was then invited to present the work at an international academic symposium, create further portraits for a PHD student living in the UK and was invited to apply for an artist residency, which I have always dreamed of doing.

Ahem. I share these details not to bathe myself in a glowing light of accomplishment, but to illustrate how following our creative nudges often leads to opportunities and events we never could have imagined. A case in point, yesterday Google Canada purchased this portrait of David Suzuki from me after being introduced to my work by a woman living in the Yukon who I have never met and do not know. Delightfully random, right?

This all started after I read Tanya Talaga’s seminal book, Seven Fallen Feathers and was inspired to draw her portrait. Thinking back on that time I am reminded of a famous speech by JFK. You can listen to it on Youtube https://youtu.be/MBTqE2OgMB4 and smile as he urges and sputters, “Don’t think, do!”  As creators, it is often what is needed. You simply have to trust and listen to those seemingly weird ideas that appear to come from nowhere. That’s your own heart trying to talk to you! That’s the divine aching to speak through you! That’s the best most unedited part of you trying to communicate to the outside world! Listen closely, but don’t think, do! 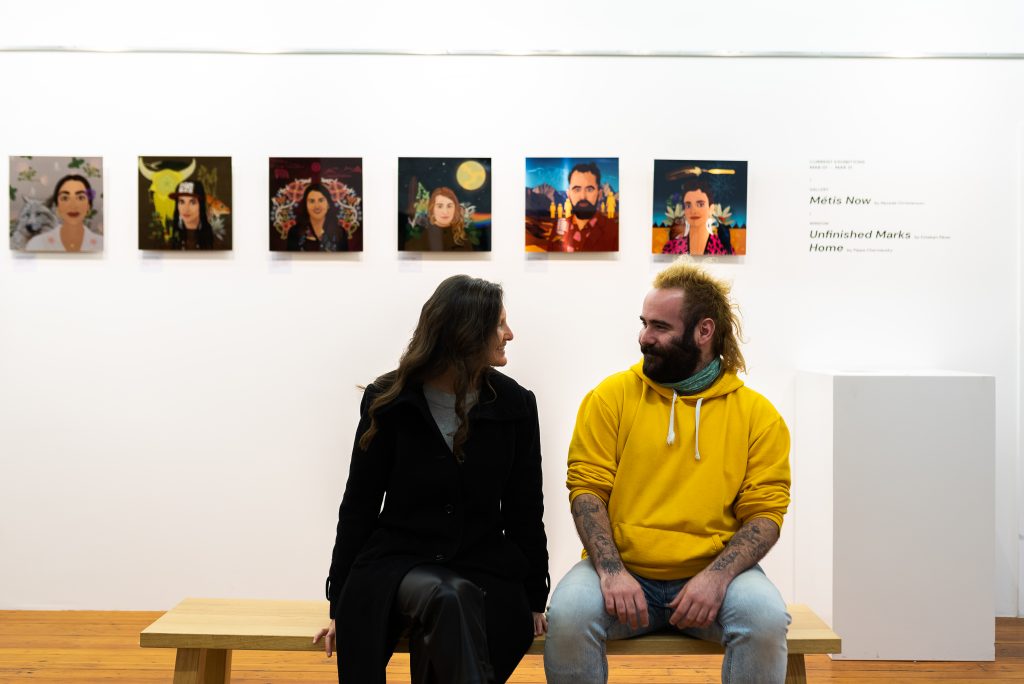 I took down the Métis Now portrait exhibit at the Massy Arts Gallery today. It was a beautiful day in Vancouver, complete with blooming cherry blossoms, blue skies and spring temperatures. It was nice to spend a couple hours at the gallery boxing up the portraits and visiting with Rafael, the understated, delightfully sassy, kind-hearted curator for the Massy.

I was surprised to see that all the cedar boughs I had gathered for the month-long exhibit were still thriving in their vases. They served as great guardians for the portraits I created of Elders, artists and activists from the Métis Nation. With twenty-six portraits printed on aluminum plates, the Métis Now exhibit was my largest solo exhibit to date. It was also my first digital art exhibit.

This change in mediums has been a welcome shift. As my work has become more oriented to social and climate justice, working digitally is giving me the ability to leverage my creative practice in ways that are meaningful to me. I am also free to work from anywhere, which is an interesting change after being tethered to a studio for so long. 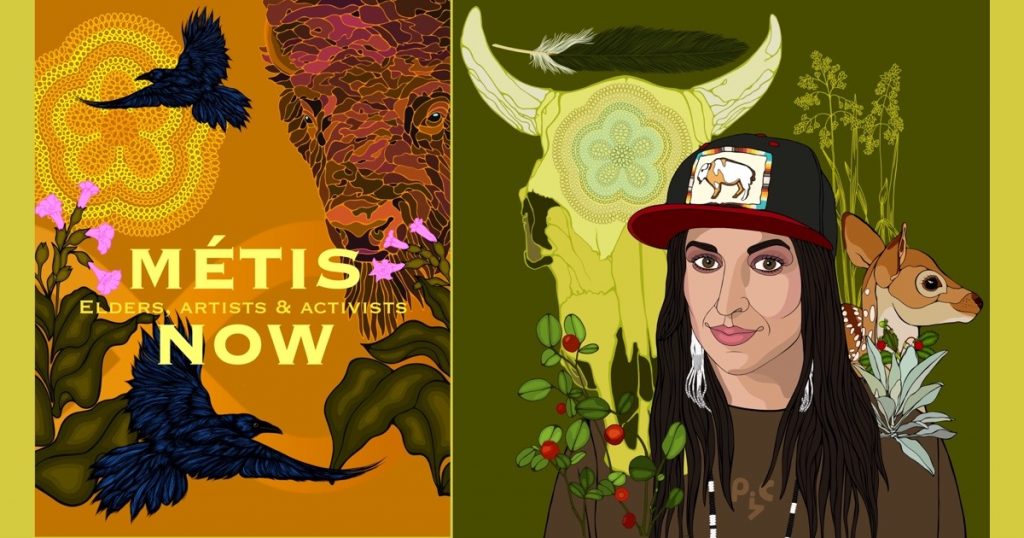 Irrespective of the changes to my personal practice, this particular exhibit was dear to me. It marks a commitment I made to connect more deeply to my own Métis identity. Creating these portraits allowed me to be in service by shining a light on inspiring members of the Métis Nation and in the process find my place in the community. The creation of this collection of portraits was special and moving in ways I never could have predicted. It has been an honour and a blessing and I am filled with gratitude. 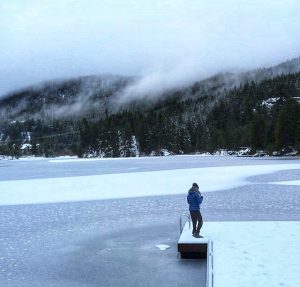 In the spring, Asta and I started a daily dip in the lake. Our practice continued throughout the summer until one crisp fall day we found ourselves wondering if we would be chopping a hole in the ice come winter. “Only if it’s still enjoyable,” Asta declared, and on this we agreed. 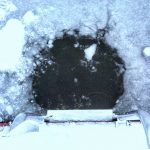 Well, here we are in the middle of January slipping into the cool waters of Alpha Lake and still loving the practice. It’s worth trying if you want an uplifting ritual that will deepen your connection with the natural world and send you on a positive trajectory for the remainder of your day. I especially recommend it for creatives; it gets the inspirational juices flowing!

Check out this clip of these sweet souls loving up the daily dip: 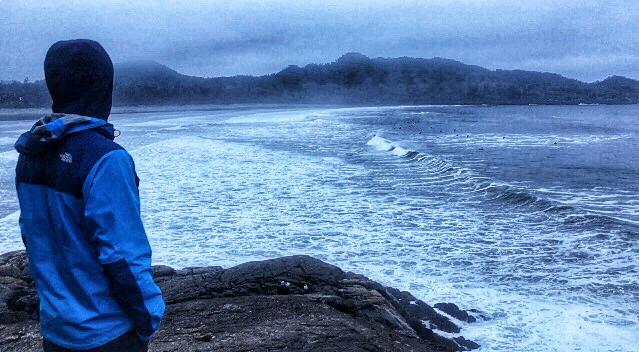 Here is a little Tofino postcard. This moody photo isn’t indicative of the weather on our trip; we had glorious fall sunshine and it only got misty on our last day. Nickolai had extra long sessions in his thin wetsuit, but I am not as attuned to the cold and retreated early to Karen Brodie’s hut tub every day with gratitude — best way to warm up! We hiked out to Frank’s Island on low tide to see the handiwork of a local carpenter who has built a stunning roundhouse overlooking Chesterman’s beach. We also managed to squeeze in some lovely beach walks, eat delicious fish tacos, make inspiring new friends and all-in-all have a wonderful time. My brother and his girlfriend even showed up for a cameo appearance. We are always grateful for our Vancouver island surf forays. This trip was a two part mission; I also delivered a painting and a box of custom trucker hats to Karen Brodie, owner of the Sacred Stone Spa.

“Out beyond ideas of wrongdoing and rightdoing there is a field. I’ll meet you there. When the soul lies down in that grass the world is too full to talk about.” –Rumi–

I think Rumi may have liked alpine runs in autumn. I had a beautiful day up high with my friend Maeve. It was a perfect fall afternoon in Whistler; we rode the gondola up in the morning, ran out to Fissile, snacked on apples, dulse, brazil nuts and dried apricots in a golden meadow encircled by old firs, then ran down Singing Pass back to the the village. We saw a plethora of mushrooms nestled in amongst the old growth cedars and we drank from clear streams flowing through the brilliant green moss.  Magical days like these keep the creative mojo working. This is what I mean when I talk about self care as part of an art practice. 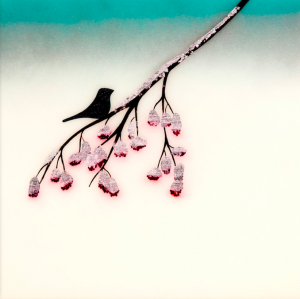 Winter said hello today with a brief, but blustery snowstorm. I have been dipping in the lake as a daily practice since April and now that the temperatures have dropped it’s getting real in the Whole Foods parking lot. It’s going to take some tenacity to keep this practice up, but luckily I have Asta, my summer long dipping partner, to keep the vibe alive.

If you work long hours in the studio or sit a lot for work, consider giving cold water therapy a try. Cold water dipping is an effective, easy, inexpensive way to reduce inflammation and uplift the mood. For reasons which are inexplicable to me I find that I am energized and inspired for the rest of the day if I have takien the time to dip in the morning.

I live next to a cold lake in the mountains, but for those of you who do not have such easy access, consider a quick dip in cold bath. It’s easier than you think and you wont be standing out in the wind and the rain come November!